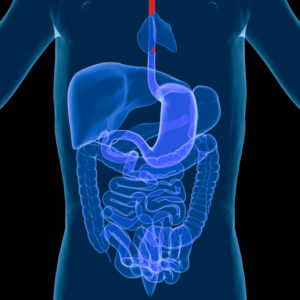 Normal esophageal function: The esophagus transports food, liquids, and saliva to the stomach via an intricate series of muscles layers through specialized sphincters, or muscle “stop valves”. Even if you were standing on your head, the esophagus can push it’s contents into the stomach!

Examples of abnormalities affecting the Esophagus:
– Acid reflux is one of the most common disorders of the esophagus. This can lead to scarring, difficultly swallowing, chest pain, or damage the lining (called Barrett’s esophagus).
– Barrett’s esophagus can increase the risk of esophageal cancer, one of the few cancers that has been increasing in numbers over the past 10 years. Some dietary or behavior changes that can decrease symptoms of acid reflux include avoiding the following; eating prior to sleep, meals high in fat, large meals, carbonated beverages, smoking, and excess alcohol. 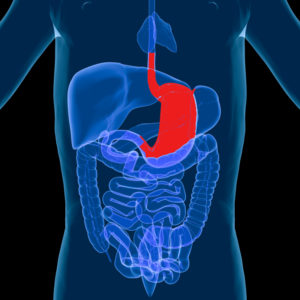 Normal stomach function: The process of digestion starts in the mouth and continues in the stomach. The chewed food reaches the stomach and gets mixed by powerful muscles with acids and enzymes produced a mixture called chyme. Chyme, when small enough, is then released into the small intestines in small amounts.

Examples of abnormalities affecting the stomach:
– In a strongly acidic environment, anything that interrupts the stomach’s protective mechanisms can result in inflammation and ulcers. Nonsteroidal anti-inflammatory drugs (NSAIDS) such as aspirin, ibuprofen, and aleve are common culprits. An infection, called H. Pylori, has also been shown to increase the risk of ulcers and even cancer of the stomach.

– Poor emptying of the stomach, called gastroparesis, is another disorder of the stomach that can result in feeling full easily, nauseous, and bloated. 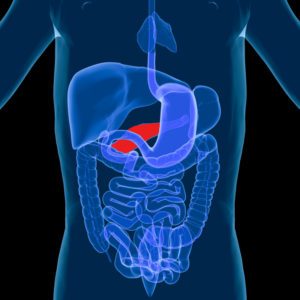 Normal pancreatic function: The pancreas is about 6 inches long and located behind the stomach. It produces enzymes, hormones, and insulin that are integral in the digestive process.

Examples of abnormalities affecting the pancreas:
– If enough insulin is not produced, a person can suffer from diabetes.
– Long term smoking and alcohol use can lead to damage and inflammation called pancreatitis, which can result in abdominal pain and possibly diarrhea.
– Cancer of the pancreas occurs in about 1 in 80 people during their lifetime and it is also one of the few cancers that has been increasing in incidence over the past ten years. 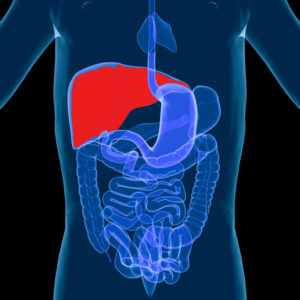 Normal liver function: The liver is the second largest organ in the body (skin being the largest) that weighs around 3 lbs. A few of the liver’s many functions include removing toxins from the blood stream, controlling metabolism, making a variety of proteins, producing bile which helps in the digestion and absorption of fat.

Examples of abnormalities affecting the liver:
– Severe scarring of the liver, or cirrhosis, can be caused from a variety of long term stressors such alcohol, viral hepatitis, and fatty liver from excess weight (called steatohepatitis).
– Gallstones, is some patients, can cause inflammation of the gallbladder requiring removal
– Several autoimmune disease of the liver can cause inflammation and damage to the liver, such as autoimmune hepatitis and Primary Biliary Cirrhosis (PBC) 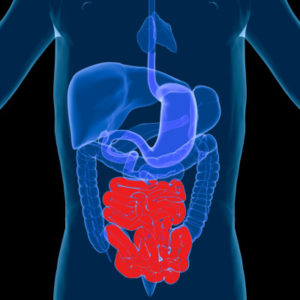 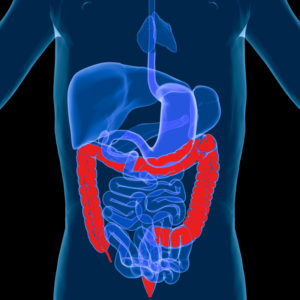 Normal colon function: The colon and rectum measures about 5 feet in length. It absorbs water and salts and helps in the storage and excretion of solid waste.

Examples of abnormalities affecting the colon:
– Colon cancer is the second leading cause of cancer deaths. 1 in 15 people will develop colon cancer in their lifetime. Only 20% of people who develop colon cancer have a family history of colon cancer so screening should start in everyone at 50 years of age or sooner if indicated.
– Diverticulosis, or small out pouches in the lining of the colon, occur in about 50% of Americans by the age of 50. An infection in one of these pockets, called diverticulitis, can occur.
– Constipation can develop for a variety reasons related to diseases within the colon or from influences outside the intestines.
– Inflammatory bowel disease, including Crohn’s disease and Ulcerative Colitis, can lead to inflammation of the large intestines.