The Amazing Health Benefits of Honey 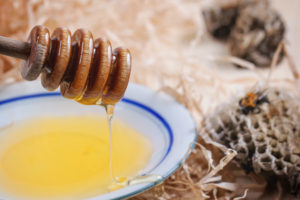 Honey has a long medicinal history. The ancient Egyptians not only made offerings of honey to their gods, they also used it as an embalming fluid and a dressing for wounds. In the laboratory, honey has been shown to hamper the growth of food-borne pathogens, and to fight certain bacteria. This is because bees add an enzyme to the honey that makes hydrogen peroxide. Its anti-bacterial qualities are particularly useful for the skin, and, when used with the other ingredients, can also be moisturizing and nourishing.

Some varieties of honey possess large amounts of friendly bacteria known as probiotics, which help with our immunity and maintaining normal digestive function. This includes up to six species of lactobacilli and four species of bifidobacteria. Honey also contains flavonoids, antioxidants which help reduce the risk of some cancers and heart disease. The darker the honey, the better its antibacterial and antioxidant properties. Manuka honey, made in New Zealand, is sometimes used to treat chronic leg ulcers and pressure sores. This type of honey is made from the nectar of Leptospermum scoparium and is the basis of Medihoney, which the FDA approved in 2007 for use in treating wounds and skin ulcers.
Honey can be very therapeutic during the cold and flu season. In a study that involved 139 children, honey beat out dextromethorphan (a cough suppressant) and diphenhydramine (an antihistamine) in easing nighttime cough in children and improving their sleep. Ancient Olympic athletes would eat honey and dried figs to enhance their performance. Research has suggested that honey is superior in maintaining glycogen levels and improving recovery time than other sweeteners.
As Pooh so wisely said:  “If everything is honey, and I am what I eat; I must be made of honey … and life is very sweet!”

Preparation:
Toast the coriander seeds in a dry, large nonstick skillet over medium-high heat, stirring constantly, until golden, about 3 minutes. Remove from heat; let cool. Grind seeds in a spice grinder or crush with a mortar and pestle until coarsely ground; reserve skillet.

Lightly brush the top of each salmon fillet with glaze; reserve remainder. Heat oil in the nonstick skillet over medium heat until hot, but not smoking. Cook salmon fillets, glazed sides down, 1 minute; reduce heat to medium-low, and cook 2 minutes more. Turn fillets over, and cook 3 minutes for medium-rare (salmon will be slightly pink in the middle), or longer if desired. Transfer to a plate; loosely cover with foil to keep warm.

Pour remaining glaze into skillet; bring to a boil over medium heat. Cook until glaze has thickened to the consistency of syrup, about 1 minute. Serve salmon with glaze on the side.