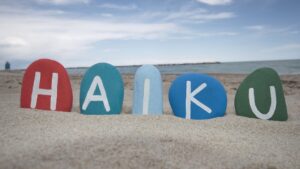 National Haiku Poetry Day is on April 17, 2021.  A haiku is a three-line, beautifully descriptive, form of poetry, intended to be read in one breath.  While some forms of poetry have free rein with regard to their subject or number of lines and syllables, the haiku was established in Japan as far back as the 9th century with a specific structure, style, and philosophy.  The Academy of American Poets asserts, “As the form evolved, many of these rules – including the 5-7-5 practice – have routinely been broken. However, the philosophy of haiku has been preserved: the focus on a brief moment in time; a use of provocative, colorful images; an ability to be read in one breath; and a sense of sudden enlightenment and illumination.”  Haiku poetry traditionally discusses abstract subjects or those from the natural world, including seasons, months, animals, and even the smallest elements of nature, down to a blade of grass or a drop of dew.  Many poets still write in the original 5-7-5 syllable pattern and follow the traditional rules for writing haiku, including this young 12yo student from Lancaster Country Day School and son of My Gut Instinct’s Aparna Mele.

These haikus were written in honor of Earth Day (April 22), National Find A Rainbow Day (April 3), and Look Up At the Sky Day (April 14)

Nothing but a small trickle

Circle in the sky

Moon and stars all around me

A Brighter World Powered By Sunshine