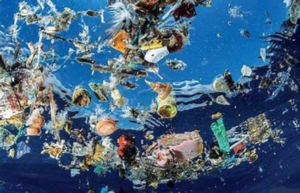 In honor of Earth Day, April 22, 2019, this blog article is dedicated to the perils that face the health of our planet’s oceans and ecosystems, wildlife, and even ourselves.  Over the last many decades, humans have progressively dumped tons of garbage and waste into our oceans. One of the most devastating impacts of this pollution comes from plastics, which take thousands of years to decay. This is leading to poisoning of our marine life and wildlife from the detrimental toxins from plastics, which then enter our food chain and thereby threaten human health too.  In some of the most polluted portions of the ocean, the mass of plastics is six times the mass of plankton, highlighting the dire situation that our oceans are in.

Plastics are transported and converge in the ocean where currents meet. This creates huge plastic ‘islands.  The Great Pacific Garbage Patch, also known as the Pacific Trash Vortex, is located in the central North Pacific Ocean and is larger than the state of Texas. There are also garbage patches in the Indian and Atlantic Oceans.

It is estimated that about 20% of the trash comes from ships and offshore platforms. The rest comes from litter being blown into the sea, picked up by tides on the beach, or intentional dumping of garbage into the ocean.  These plastics are not biodegradable, and instead they break up into tiny pieces that are consumed by fish and sea mammals. Plastic kills more than 100,000 sea turtles and birds a year from ingestion and entanglement.

Rolf Halden, associate professor in the School of Sustainable Engineering at Arizona State University and assistant director of Environmental Biotechnology at the Biodesign Institute has undertaken a survey of existing scientific literature concerning the hazards of plastics to human health and to the ecosystems we depend on.  He has delineated how the chemicals in plastics are released into the water, explaining that plastics are polymers-long chains of molecules usually made of carbon, hydrogen, oxygen and/or silicon, which are chemically linked together or polymerized. Different polymer chains can be used to create forms of plastics with unique and useful properties.  BPA is a basic building block of polycarbonate plastics, such as those used for bottled water, food packaging and other items. While it has been considered benign in the form of a heavily cross-linked polymer, its bonds can break down over time, when plastics are repeatedly washed, exposed to heat or other stresses, liberating the building blocks of the chemical, which are toxic. BPA can have detrimental effects on the brain, behavior and prostate gland of fetuses, infants and children.   The polystyrene components in styrofoam sink lower in the ocean, so that the pollutant spreads throughout the sea column.  These toxins in plastic can also act like sponges, soaking up other toxins from outside sources before entering the ocean. These chemicals are ingested by animals in the ocean, and this is how plastic chemicals directly enter the food chain, when humans ingest contaminated fish and mammals.   Direct toxicity from plastics comes from lead, cadmium, and mercury. Adding to the health risks associated with BPA is the fact that other ingredients-such as plasticizers-are commonly added to plastics. Many of these potentially toxic components also can leach out over time. Among the most common is a chemical known as di-ethylhexyl phthalate or DEHP. Diethylhexyl phthalate (DEHP) contained in some plastics, is a toxic carcinogen.  Toxins in plastics are directly linked to birth defects, immunocompromise, and developmental issues.

Halden points out that while plastics have legitimate uses of benefit to society, their brazen misuse has led to a radically unsustainable condition, with “a complete mismatch between the useful lifespan of the products we consume and their persistence in the environment.” Prominent examples of offending products are throwaway water bottles, Teflon-coated dental floss, and cotton swabs made with plastic PVC sticks.  All of these single use plastics are typically used for a matter of seconds or minutes; yet are essentially non-biodegradable and will persist in the environment, sometimes for millennia.

The average person produces half a pound of plastic waste every single day, and much of this ends up in our oceans.  There are efforts to protect the oceans from plastic pollutants along with human health, but they are mostly grassroots organizations. Our marine life and many species are threatened by this global problem and our own human health is also in jeopardy.  We as humans and members of this fragile ecosystem have a great responsibility to protect our oceans from non-biodegradable waste.  We, as a society, need to make wiser and more sustainable choices, creating products made of biodegradable, non-toxic polymers made from renewable materials that are digestible by microorganisms. Try to avoid buying products packaged in plastic; and avoid using single-use plastics if possible, relying on reusables instead. Always recycle plastic when you do use it. Use paper or cloth bags instead of plastic.  Most importantly, don’t litter.  Let the spirit of Earth Day remind us of our personal responsibility to protect our oceans, our marine life, and our own health.