SAVE OUR ELEPHANTS: an Earth-wellness article 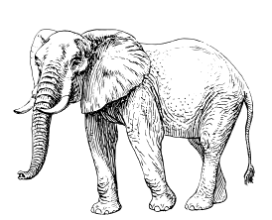 April 16th is Save the Elephants Day, providing a perfect opportunity to share some interesting facts about these gentle giants! Furthermore, it is important to learn about the endangerment of these beautiful animals, and what we can do to replenish their steadily decreasing populations.

Elephants have been one of the most iconic animals in our culture and civilization for a long time, yet people continue to overlook the fact that these popular animals are very endangered. Asian elephants are particularly at risk– a 50% decrease in their population during the last century resulted in less than 50,000 left in the wild. Meanwhile, 90% of African elephants have been killed in the last century alone. These circumstances may seem irreversible to some, but there is still hope if we make changes. After all, it is humans that are causing this immense decline of elephants in the wild.

So, what can we do about it? Changes in the world’s ivory consumption can facilitate the expansion of the elephant population. To this day, one of the biggest threats to elephants remains poaching. Poachers continue to disregard the official ban of ivory products in 1989, persistently killing  elephants for their profitable ivory. Although male Asian elephants sometimes have tusks, theirs are much smaller than those of African elephants; meanwhile, Asian female elephants don’t have any at all. Both male and female African elephants have valuable tusks, making them a primary target for desperate poachers. An average of fifty-five African elephants are killed each day, due to illegal operations. That adds up to twenty thousand African elephants alone being killed per year.

In order to save these innocent animals, we must change these alarmingly high numbers. Despite worldwide efforts to internationally ban the ongoing ivory market, some countries continue to use and sell ivory. As ivory is considered a symbol of power and wealth, many people enjoy adorning themselves with large ivory jewelry and accessories. People should definitely not support illegal markets carrying ivory goods, nor should they disregard the death or poor treatment of innocent elephants for our consumer “benefit”. If you travel somewhere that still sells ivory, do not buy it. For some, it may be tempting to buy a souvenir containing ivory, but just imagine the elephant that died to make that product. A life for a bracelet is most definitely not an equivalent comparison. The hope is that with a lack of sales due to the bans, the poachers will lose momentum and the ivory trade will be less appealing to them. Also REFUSE to take an elephant ride—these elephants in captivity are abused and mistreated and exploited terribly for the tourism industry, living tortured lives and dying early. Do not support businesses that exploit these magnificent animals for human leisure or sport!

Another issue that is diminishing the elephant population is habitat loss. Much of the land that contains elephants is ideal for farming and developing, resulting in humans taking over the animals’ natural habitat. Asian elephants were forced to abandon 85% of their natural habitat, ensuing in less space for the elephants to disperse. However, elephants are used to roaming freely, resulting in the elephants intruding upon the farms. Hungry elephants can eat a year’s-worth of crops in one night, causing conflict between the farmers and elephants. In an attempt to save their crops, as well as permanently chasing the elephants away, farmers often end up severely wounding or killing the elephants. Furthermore, elephants’ lands are often used for grazing livestock, aggravating the elephants and sometimes leading to either the elephant’s or herder’s death. Additionally, overgrazing can consequently lead to a lack of sufficient grass for both elephants and livestock, causing herders to continue using elephants’ land as grazing land. Not only do many elephants lose their habitat due to humans, but they can also lose access to essential food and water. Infrastructure development can obstruct resources from elephants, as well as possibly separating herds. This reduces opportunities for breeding, which is essential to grow the continuously decreasing population.

If we don’t do anything about this situation, and the elephant population continues to plummet, World Wildlife Fund  estimates that African elephants will become extinct within the next two decades. Think about it: that means that the next generation might never share the planet with these unique creatures. The ivory trade needs to end. Don’t forget, even seemingly insignificant acts, such as refusing to buy ivory products, can help. Alternatively, if you wish to also take a firsthand approach, you should consider donating to www.savetheelephants.org or www.wildlifesos.org. Even a small donation will help make a major impact. And don’t forget to recognize these amazing creatures, not only on April 16th, but always!

Here are some fascinating facts about elephants that prove the distinctive uniqueness of these amazing animals!