The Rules of Separation at the Grill 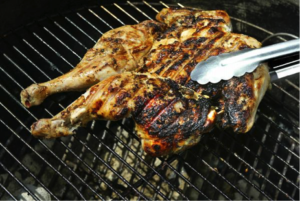 It’s officially summer, and ovens across America are turning off and grills are firing up! Food safety is crucial not only in the kitchen to prevent food poisoning, but at the grill too. The same rules apply, especially when it comes to preventing cross-contamination.

During grilling season, cross contamination tops the list of food safety concerns. When juices from raw meats or bacteria from unclean items touch cooked or ready-to-eat foods, cross-contamination can occur, spreading harmful bacteria that can make you sick.

Prevent Food Poisoning with These 5 Rules of Separation:

Rule #1:      Always start with a clean grill. Scrub your grill with hot soapy water before you fire up the coals. Removing charred food debris from the grill reduces exposure to bacteria.

Rule #2:     Use separate plates for uncooked and cooked foods. Do not put cooked foods back on plates that originally held raw foods. Always wash plates or serving trays in hot soapy water between uses or better yet, use separate plates: one for bringing raw meat, poultry and seafood to the grill and another for taking cooked foods off the grill.

Rule #3:     Clean utensils or use separate utensils as you grill. After using tongs or spatulas to put raw meats, seafood or poultry on the grill, clean them thoroughly with hot soapy water before using them to remove cooked foods. If it is too much to clean utensils while manning the grill, use two sets of utensils: one for raw meats and the other for cooked foods.

Rule #4:      Marinate mindfully – before, during and after grilling! Never reuse a marinade that was on raw meats, seafood or poultry on cooked foods. While you are at the grill, never use the same brush to baste both raw and cooked meats with the marinade. Always use a different brush or one that has been washed in hot soapy water when going from marinating raw meat to marinating cooked meats.

Grill responsibly and takes the germs out of your summer meals!

The 15 Minute Workout Eat Your Bulbs