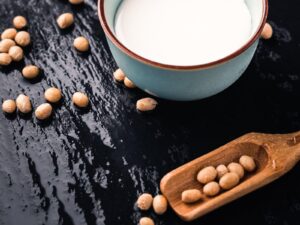 Plant based milks are increasingly popular, whether it is part of a vegan diet, a lactose allergy, a healthier and lower fat alternative, or simply because they are tasty!  Each type of milk is distinct, with its own advantages and disadvantages. Some provide more nutrients, for example, while others are low in calories, making them useful for dieters. Then there are the plant-based milks that can trigger allergies, including coconut milk.  Here is a rundown of the most popular ones:

Soy Milk:  Soy milk is one of the longest-standing milk alternatives and is rich in proteins and fat. Its health benefits are primarily attributed to the presence of isoflavones which are linked to exhibit anti-cancer properties.  More recently, soy has come under scrutiny for its environmental impact and the growing of soybeans is a major contributor to deforestation especially in the Amazon rainforest; however the majority of soybeans grown in South America are cultivated to feed cattle rather than for soy milk.  Soybeans require far less energy than cows to produce milk and are good for the soil as they replenish the nitrogen content.  Realistically, there is a higher chance that soy will promote health, as it contains many desirable nutrients. Many companies fortify their soy milk with B12 and calcium. making it a good source of nutrients.  There are concerns that too much soy can lead to an excess of certain phytoestrogens which may have a detrimental effect on the human estrogen hormone. There are health benefits to phytoestrogens but they might not outweigh the health risks, especially to infants. It’s wise not to consume too much soy-based food or drink until the health benefits and risks are properly assessed.

Coconut Milk:  Coconut milk is made by blending the flesh of coconuts with water and then filtering the resulting liquid. Coconut milk has one-third the calories and half the fat of cow’s milk, but also has less protein. Coconut mild is a good course of vitamins and minerals, including vitamin C, iron, potassium, folate, Mg, copper, manganese, and selenium. Canned coconut milk is generally more concentrated. On the other hand, coconut milk in the carton tends to be more watery and lower in fat. The differences are generally because canned coconut milk is used for cooking, while coconut milk in the carton is used as a milk alternative.  From an environmental standpoint, coconut farms tend to be very ec-friendly and require little water. Make sure ot buy fair trade coconut milk to ensure thay workers and animals are not exploited as monkeys have been trained in Thailand to pick coconuts.

Almond Milk: Almond milk has a smooth texture and a mild, nutty flavor. It’s often added to coffee, teas, and smoothies or used in desserts, baked goods, or in a bowl of cereal. Though almond milk is low in protein and fiber (due to the removal of the outer skin), it’s also low in calories and fat and is a natural source of vitamin E and calcium. But almond milk tends to be mostly water. Many brands only contain around 2% almonds. This does mean that almond milk is much lower in calories and in fat than dairy milk and many other plant-based milks. More than 80% of the world’s almonds are grown in California. The problem with this is that it takes about 5 liters of water to produce only 1 almond tree and additionally the pesticides used could also have long lasting effects on the environment.  It is worth noting that the almond industry is making progress towards increasing the sustainability of almond production and there are more organic almonds available now as well.

Cashew Milk:  Made from whole cashews or cashew butter, cashew milk has a sweet, creamy, and nutty taste, which makes it ideal for thickening smoothies and as a coffee creamer/sweetener.  It is created by soaking almonds in water, blending them to create a paste and then straining the finished product. This milk still consists mostly of water and tends to be a little lower in calories than almond milk. It’s low in carbohydrates and sugar and has less than one third the calories of cow’s milk. Unfortunately, cashew milk is relatively low in protein. If you’re planning to make your own nut milk, cashew milk is a great first choice as cashews are softer than many other nuts. This makes them much easier to blend. You can even use the milk as-is without straining it. Doing so would give you more nutrients from the nuts, which is an added bonus. Cashews have a huge environmental impact. They are grown in tropical countries, and they require transport to be sold in North America and in Europe, where the demand is growing. This demand comes at a steep cost because cashews are such a thirsty crop. Depending on irrigation techniques used, it takes between 180 and 1704 gallons of water to produce a pound of cashews! Shelling cashews is labor-intensive and harmful to the skin, so limit your intake of cashews and when consuming, always look for fair trade cashews to avoid supporting human exploitation practices.

Hemp Milk: Created from healthful hemp seeds, this milk is one of the highest sources of plant-based proteins sources, providing many essential amino acids. It is also a natural source of calcium, omega-3 and omega-6, plus magnesium, iron, zinc, and vitamin B1. Hemp milk has an appealing nutty flavor. It can be used in many ways, like as a smoothie addition or in baking. Hemp requires very little water to grow compared to other plant-based milks and hemp seeds do not require using herbicides or pesticides, making it one of the most environmentally friendly plant milks on the planet.

Oat Milk:  This plant milk is derived from whole oat grains by soaking the plant material in water to extract its nutrients, then blending them. This creaes a creamy milk that retains its nutrient balance and the flavor of oats. Commercial oat milk is often fortified with Vitamins A, D, B2, B12, and minerals such as calcium. It tends to have more calories and fiber, making it very filling. Oats use 80% less land than what is required for dairy milk and requires far less water to produce.

Quinoa Milk:  Quinoa is a popular ancient grain used in cereal, rice, and granola. The idea of using quinoa to create a milk alternative, on the other hand, is only beginning to catch on.  Right now, most versions of quinoa milk are the ones that people make at home using cooked quinoa. The milk creation process does mean that you’re not getting much quinoa in the finished product, making the milk relatively low in nutrients too. That said, the environmental impact of quinoa is huge and you should keep this in mind when considering consuming it in any form. Not only does quinoa grow at very high altitudes, but it relies on the natural manure produced by llamas in the region, who have now been displaced by human expansion. llamas traditionally provided natural fertilizer and prevented erosion, which has caused farmers to replace the manure. This, combined with the fact that crops are no longer rotated, depletes the soil and can lead to erosion.  As a result of global warming and higher temperatures, farmers are utilizing insecticides and other agrochemicals in an attempt to eliminate opportunistic insects, but at the expense of bees and good insects who are essential to the growing process.

Flax Milk: Flax milk is another option that people are making at home. This type of milk is free from all major allergens, and is also rich in plant-based omega-3 fatty acids. But you won’t get that many nutrients from flaxseeds themselves in flax milk.  Flaxseed is an incredibly hearty and sustainable plant and offers many environmental benefits, as it does not require irrigation, is naturally pest resistant and is non-GMO, meaning it is grown naturally and does not use genetic mutation for the health or enhancement of the crops.

Rice Milk:  Rice milk is a classic milk alternative made by pressing rice through a mill using diffusion to strain out the pressed grains. Rice mild is a good source of magnesium and vitamin B, but otherwise has limited nutrient density. One big advantage is that rice milk doesn’t trigger many allergies, making it suitable for people with soy, nut, or dairy allergies. Most of the calories in rice milk come from carbs. The carb content is useful for people who are active, especially if they are drinking the milk before exercise.  The high carb content also makes rice milk higher in calories than many of the other options. Rice does take a lot of water to grow and some of the world’s rice is now genetically modified and has been deemed unsafe in some countries.

Pea Milk:  Pea milk is harder to find than most other options and tends to contain more protein than nut-based milks, helping you stay full for longer. The milk is made from yellow peas, the same type that are used to create protein powder. Indeed, the process of making pea milk does involve separating out pea protein, purifying it, and then blending the protein with other ingredients. Because this milk relies on pea protein rather than peas themselves means that the finished drink does not taste like peas at all.   Bonus, peas have a small environmental footprint, as yellow peas grow in areas that receive lots of rain, so they need little or no irrigation.

12 Essential Spring Gardening Tips Guide To Home Workouts: How To Set Up & Get Going In 2021

Learning to Breathe – A Breath of Fresh Air

The Power of Reiki

How to Start a Gratitude Practice