The Far-reaching Effects of PTSD in Veterans 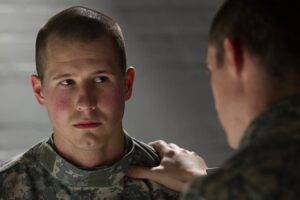 Post-traumatic stress disorder (PTSD) is a psychological condition caused by exposure to traumatic events that are outside the normal range of human experience. These events shake the foundation that our mental health is built on and create a disconnect between the victim’s expectations and reality. The effects of PTSD in veterans are not always visible. This disconnect causes sufferers to lose faith in the stability and normality of their world. Without this faith the smallest task becomes harder. The effects of PTSD create a deep distrust of natural laws and, in the worst cases, cause a complete loss of function as the sufferer retreats into anxiety and depression.

The U.S. Department of Veterans Affairs reports that incidence of post-traumatic stress disorder among veteran varies depending on which conflict a service member was involved with.

Symptoms of PTSD may include:

The symptoms of PTSD are present in all trauma victims to some degree. What sets PTSD apart from trauma is the length of the effects. The human mind is a highly adaptable organ and most victims of trauma eventually cope with the feelings of helplessness and are able to reconnect with their life. The effects of PTSD, however, have a longer term effect.  Many of the effects of PTSD make it difficult for the sufferers to recognize it in themselves and, even when they do, avoiding treatment is not unusual. Between the depression and the disconnect with normal life, many victims just don’t see the value of treatment.

In addition to the physical scars, many of our veterans returning from war zones carry mental and emotional scars that can affect them for years or their entire life. Furthermore, tThe effects of PTSD aren’t just a burden carried by the veterans, their families and friends have to learn to cope with PTSD, as well.

On a good note, there are several treatments and programs to help veterans with PTSD that are supported by research. These evidence-based approaches include:

Focusing on how trauma can affect all aspects of a person’s life, trauma-informed care is an umbrella term used to describe the person-centered approach that aims to improve wellness and functioning instead of simply focusing on treating symptoms. People may undergo a wide range of therapies that can include trauma-based psychotherapy (talk therapy on an individual or group basis), prolonged exposure therapy (PE), cognitive processing therapy (CPT), or EMDR (eye movement desensitization and reprocessing).

This form of treatment has the most scientific evidence to support its usefulness. You receive between 10 and 12 sessions that last 90 minutes each and participate in psychoeducation, breath retraining, imaginal exposure, and in vivo exposure. People are educated about PTSD and its symptoms, learn breathing techniques to promote relaxation, and undergo specific imaginary exposure exercises to become habituated to the memory of the trauma. You may repeatedly tell your story or be asked to confront your fears associated with the trauma in different ways.

CBT helps you understand why you think and react to things in the way that you do and helps you identify your triggers.8 CBT has been demonstrated to be effective at treating PTSD in service members through a variety of techniques in which you learn to identify and replace unhealthy thoughts and behaviors with healthier ones.

CPT also has significant scientific evidence to support its benefits and includes elements of CBT. You receive psychoeducation about PTSD, participate in cognitive restructuring (identifying and changing inaccurate or negative associations and thoughts about the trauma), and undergo exposure exercises. You usually receive 12 one-hour-long sessions.

While this approach is widely used for PTSD, research has shown mixed results, although a number of studies have demonstrated some promising benefits, such as reduced symptoms. In this form of treatment, a therapist assists you with recalling the trauma while making specific sensory movements, such as eye movements or hand tapping.

Medication for veterans with PTSD could help alleviate or control some of your symptoms. The U.S. Department of Veterans Affairs and Department of Defense recommend the use of specific medications to treat PTSD, namely paroxetine and sertraline, which are antidepressants known as SSRIs, or selective serotonin reuptake inhibitors.

This approach was developed by the Army to help reduce PTSD symptoms in newly returned soldiers. During this time, you learn effective coping skills to help address anger management, stress, insomnia, and other symptoms, while also working on issues like social isolation.

CAM approaches that have demonstrated some clinical benefits for returning service members with PTSD include meditation; mind-body practices like yoga; and biofeedback, a form of treatment that involves learning to monitor and control bodily functions like heart rate and blood pressure through the help of electrical sensors. One form of biofeedback that may be useful for PTSD is cardiac coherence training (a specific treatment that involves using biofeedback to control your heart rate to induce relaxation).

One study showed the benefits of mask-making in an art therapy context for service members with PTSD. Making masks helped participants represent their challenges, struggles, and experiences in a visual manner, which benefitted their recovery. The healing power of music can also help soldiers cope. A nonprofit called Guitars for Vets creates a community amongst vets by giving them free guitars and teaching them to play. Here they can find solace in the songs they love and the songs they have yet to write and this organization has already provided 4000 free guitars to military vets and offered 40,000 playing lessons.

If you know a vet in need going through PTSD, check out these valuable resources:

How to Do the Perfect Squat JOMO

Feel Better in Your Golden Years With These 7 Tips

How to Handle the Holidays